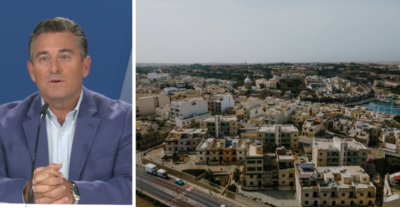 A government led by the Nationalist Party will see to it that the unbridled construction witnessed in Malta over the past eight years is brought under control, party leader Bernard Grech has said, though he stopped short of providing any specific policies that would be changed.

Grech was addressing a press conference launching the party’s new working group on the environment, where he was asked about the 2006 rationalization exercise, which saw several areas of the island included in the development zones, as well as permissible building heights extended in various other areas.

The exercise has been a convenient excuse that is regularly used by government MPs to justify unpopular construction. Despite this, there have been no attempts to amend the plans.

Answering journalists’ questions about whether a PN government would change these plans, Grech said that he would not do anything that would see people’s rights impinged on.

He defended the 2006 exercise by saying it was required at the time. That said, 15 years had now passed and the country’s needs had changed.

Grech said the PN was open to making some changes, especially in light of people’s discontent with the level of construction going on around them, however, he said the party was conscious of the fact that many people had bought or sold property on the basis of those plans.

He did add that the PN in government would be open to buying back some spaces for them to be enjoyed by the public.

Asked whether the nation could trust the PN when it came to the environment, Grech acknowledged that the PN had made mistakes in the past, but insisted that the country now needed to look to the future.

PN is not opposed to marinas but Marsaskala plans are abhorrent

On the proposed plans to construct a yacht marina in Marsaskala, Grech reiterated that the PN was against the project in its current format.

“I have made it clear that we are with the residents of Marsaskala. We can’t let a few people seize what belongs to the whole community. This is no longer acceptable,” Grech said.

However, he said that this did not mean that there couldn’t be “better organisation of boats in the bay”.

A PN government, he said, would seek the best possible way of using public spaces taking into account the needs of all stakeholders.

“As long as I am Opposition leader I will give my opinion on what is being proposed. When I am Prime Minister, I will make my own plan and will ensure that public spaces are used fairly.”

What do you make of Grech’s remarks?